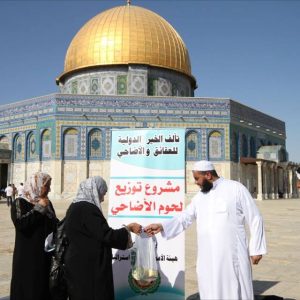 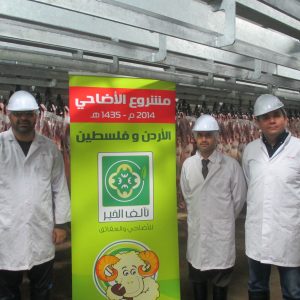 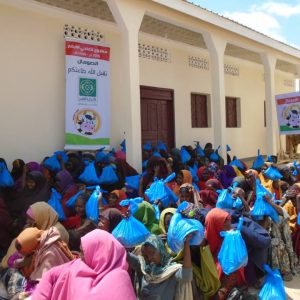 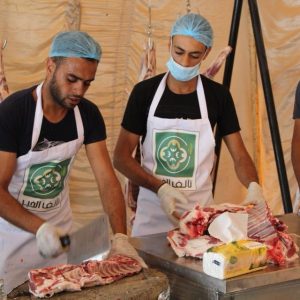 Win the qurbani and feed the hungry of our brothers from the Somali refugees. The sacrificed cows or local sheep that meet the legal requirements are slaughtered and distributed there

The qurbani are Roman, Australian or Spanish sheep, or as available, distributed in Jordan, Australian sheep or cows, Brazilian calves in the West Bank and Gaza, and local cows in Somalia. The sacrifices meet the legal requirements.
The average sacrificial weight of sheep is approximately 40 kg, after skinning between 14-20 kg and at an approximate rate of 16 kg, for cows after skinning approximately 100-150 kg, and Indian cows for Jordan at a rate of 85-120 kg.
All the sacrifices are slaughtered in all countries, from after the Eid prayer until the fourth day of Eid.
The sacrifices are distributed as follows:
55-60% of the sacrificed amount is distributed almost fresh on Eid to Jordan and Somalia, and for the happiness of the poor, the rest is distributed frozen throughout the year in Jordan and Palestine, and these percentages can change slightly according to what he deems fit good.
Distributed to poor families and refugees through cooperative charities
The sacrifices will be distributed according to the following ratios: Jordan (50%), Palestine (20%), Somalia (30%)
In the event that the sacrifice cannot be distributed due to force majeure circumstances beyond the control, the occupation authorities have been intransigent in introducing it, or for any other reason, the corrupted good will do his utmost to distribute it in other places.
Good spoilers can change the proportion of sacrificial distribution for the specified countries if they see a decrease, increase or sufficiency of the needy in any country or as a result of any force majeure beyond the control.

It is known that these sacrifices are slaughtered in the country of origin, whether in Romania, Australia, Sudan, Russia or Spain (as available) on the days of Eid and they are shipped by air by air for the sacrificed sacrifices and by sea for the frozen sacrifices and therefore any compelling or outside circumstances such as the comprehensive prohibition are taken into account Or partial, or any instructions issued by the official authorities affect the movement of shipping and distribution.

A charity sheep is offered to the needy for every 100 sheep in compensation for the fall and guts of the sacrifices that are slaughtered in Romania or Australia.
The sacrifice is given to charitable societies only, which in turn deliver them to needy families, according to studies they have undertaken.

There are no reviews yet.

Be the first to review “Qurbani Somalia – JOD 125” Cancel reply

Hi! Click one of our member below to chat on Whatsapp